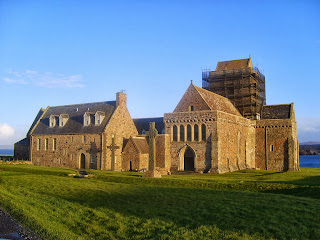 Since a weeklong stay with the Iona community in Scotland, I’ve been pondering the use of symbols in worship. Not the primary Christian symbols used in worship—bread, wine, water, oil—nor even the cross. Rather, I’m thinking about non-sacramental worship.

Worship at Iona occurs twice a day. Morning worship has an unvarying daily structure—a service centered on scripture and intercession. Evening worship has a different focus each day, so that pilgrims who participate in the community’s weekly programs move through a set sequence of services. Monday is a “Service of Prayer for Justice and Peace,” and Wednesday brings an “Act of Commitment Service.” The week I was there, both of these services focused on unconventional symbols: a tea bag and a door.

At the service of prayer for justice and peace, the officiant asked the assembly to consider the cost of tea. She explained that workers on tea plantations in India make just 12 pence an hour, and girls are regularly sold into slavery because their parents need the money and can’t afford to feed them. After a gathering and introduction of the theme, we heard the parable of a dishonest manager. Three readings followed: first, from an 18-year old girl who had been sold into slavery by her parents at age 14; then, from a trafficker; finally, from those attempting to address the problems of unjust wages. Together, these readings highlighted the complexity of the issue; even “fair trade” tea is implicated. After the readings, worshipers were invited to take the tea bag that had been placed on each seat and ponder possible responses, then come forward to tables set near the altar/table, where we could leave our tea bag in a bowl and pick up a slip of paper about “The Cost of Tea.” The service concluded with an affirmation of faith, prayers, and a sending. 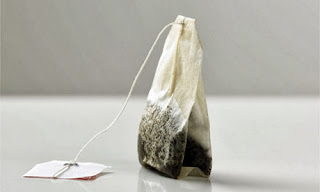 Two days later, I participated in a service of commitment entitled “Boundary Crossing.” When we entered the Abbey church, we found a door propped up against a chair at the west end of the nave (near the place where the officiant customarily sits). After opening sentences and a song, the assembly was seated, and a man moved from his place to stand next to the door. Six other people came from different places among the assembly—one in a hooded sweatshirt, hood up, wearing dark glasses; another in coveralls splattered with paint; a person wearing an apron, and another wearing a clerical collar; another with a baseball cap, and one wearing a dark shirt. As they emerged from their places, they stared intently at the door and moved slowly toward it.

Once they had arrived at the door, the person standing next to it pushed it over so that it landed with a loud “thud.” He picked it up and dropped it again, slowly moving through the aisle to the altar/table at the east end. The only sound we heard was the sharp banging of the door as it was moved end over end. The six characters followed it, still staring intently at the door, and after it was propped upright against the altar/table, they slowly backed away to the west end, eyes still fixed on the door.

Finally, the silence was broken. The first watcher came to a microphone and spoke words of accusation against Jesus because he had transgressed. When she finished speaking, she walked deliberately to the door with a handful of 4-inch spikes in her hand. After placing them on the door (from where I was sitting, I couldn’t see exactly where), she turned her back on the door and walked quickly away. The next speaker spoke her accusations, then came forward with a hammer, which she placed on the door as well. Next came a rope coiled in a circle that looked something like a crown of thorns, then, one by one, two actors brought a 4x4 beam, one placed upright, the other across the upright. Finally, a card inscribed INRI. Each actor turned away from the door and walked away once their object had been placed. Once the tableau was complete, we sang a song called “Look Out,” with the refrain “Jesus, beware.” 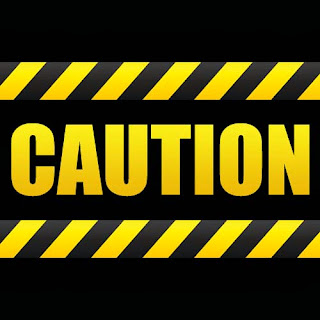 Then, one of the worship leaders talked about crossing boundaries: Jesus as one who challenged the status quo and crossed the line; the limits and boundaries we face. The leader invited us to step from our places to make an act of commitment. Lines of yellow-and-black-striped caution tape were on the floor of the center aisle in the nave, and if we chose, we could stand on one side of a line (facing toward the altar/table and the tableau propped in front of it) and decide whether to step across it. We stood to sing “Lord Jesus Christ, Shall I Stand Still?” During the third and final verse, we could move to make the act of commitment. At first, few did so. Seated near the altar, standing at a line myself, I couldn’t tell whether anyone was moving. So when I turned to go back to my seat I was deeply moved to see a number of people in the center aisle. The service concluded with an affirmation and the South African song “Ewe Thina/ We Walk His Way,” during which the entire assembly processed out of the church into the cloister. There, the singing continued for several minutes.

Two very different symbols: a door, and a tea bag. How did they “work”? What meanings did they evoke? Time at the Iona community offered both informal and structured opportunity to ponder with other worshipers.

The tea bag was confusing. Not a symbol with resonance in Christian tradition, it was used to make concrete the issue that we were considering—unjust wages for tea workers and the consequent human trafficking. I didn’t see the tea bag in my seat until directed to pick it up, and from the hunting around I observed, I suspect that most worshipers didn’t see it. (There was a tea kettle on each of the two tables where we eventually placed our tea bags, but the meaning was opaque at the beginning of the service.) What were we doing by placing the tea bag in a bowl with others? It wasn’t our own offering, since we hadn’t brought it to the service. It probably couldn’t be used to make tea, given health regulations, so weren’t we actually contributing to the problem by wasting the tea? I learned later that some worshipers chose not to give up their tea bags, though the officiant didn’t offer this as an option. Some people thought the tea bag would be more effective as a take-away object, one that would call to mind the issue when they happened to find it in their pocket.

Though I could understand the issue, it may have resonated more with those from the United Kingdom, where tea is an integral part of the culture. Overall, worship that evening instilled in me a sense of guilt, along with frustration that there was no solution nor even any action I could take that might lead to justice. 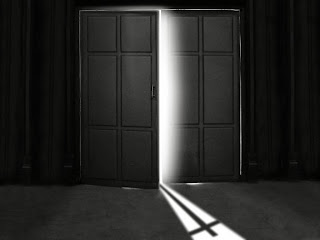 The door was also puzzling, at least at first. The extended movement—actors toward the door, the door end over end from the west end to the east, actors backing away, all the while gazing intently at the door—drew the assembly’s attention to the door, even though we didn’t understand what was happening. Gradually, as actors spoke accusations against Jesus (never by name, always “you”) and created the tableau, meaning became evident. I thought about Jesus as the gate for the sheep, and Jesus’ command to enter by the narrow door. I remembered the stained-glass window in the chapel where I worshiped as a child, a door with no handle, because, my mother explained, we had to open the door for Jesus. I pondered what it is to cross a threshold. As I listened to the actors’ accusations, the one that resonated most profoundly was the priest who criticized Jesus for daring to change worship practices.

We discussed our responses with Jo Love and Graham Maule, part of the Wild Goose Resource Group who designed the worship. Would the door be effective with people who don’t know the Christian story? It might lead them to wonder and so bring them into the story, while those who know scripture have more specific references to help them interpret it. Graham and Jo explained that when they design worship, they take a lot of time to think through symbols they consider using. What will enable the assembly to focus on the symbol? How exactly will the symbol be used? Might there be unintended meanings evoked that would be confusing or even counter to what the leaders hope to convey?

At Holy City in Glasgow, Scotland, which meets monthly for non-sacramental, ecumenical worship, they begin with an hour-long workshop, giving them opportunity to introduce concepts or symbols that will be part of that evening’s worship. A group meets after the service—on Thursday, following a Sunday gathering, so there is time to reflect individually rather than reacting immediately in a group process—to discuss the experience and begin planning next month’s worship.

Ruth Meyers is the Hodges-Haynes Professor of Liturgics and Dean of Academic Affairs at Church Divinity School of the Pacific, and author of Continuing the Reformation: Re-Visioning Baptism in the Episcopal Church. She is currently working on a book about liturgy and mission. She is the chair of the Episcopal Church’s Standing Commission on Liturgy and Music and an associate member of the Council of The Associated Parishes for Liturgy and Mission.
Posted by aplm2013.blogspot.com
Email ThisBlogThis!Share to TwitterShare to FacebookShare to Pinterest