Depending on which side of the North American border you will be preaching this week, you will be observing the Nineteenth Sunday after Pentecost or the Feast of St. Michael and All Angels. I will do my best to speak to both below…

When I crack my Bible open to the lectionary texts of Proper 21 (26), I find myself thinking of a man in a small group considering the text from Luke 16. A simple person of few words, he listens carefully, as usual, to many well-reasoned reflections offered by others in the group. They muse about various metaphors and scriptural allusions they recognize in the text. They ponder what the parable might reveal about anything from notions of the afterlife to the socio-political conditions of Jesus’ day. Finally, when there is a noticeable pause in the conversation, he chimes in. “It seems to me,” he says, “that the great chasm was there long before the two of them died. We have Moses and the prophets. Someone has come back from the dead, too. Perhaps we’d best pay attention to any chasms we’ve got going on around us right now.”

The topsy-turvy Kingdom of God and its implications for the here and now are painted with vivid brushstrokes in the third Gospel. When it comes to the reversal of norms and status in God’s Reign – like that between rich and poor – and what that means for the order, witness and ethic of the Christian community – Luke doesn’t let up for a moment, especially the closer Jesus gets to Jerusalem, to his rendezvous with the cross.

According to Luke, while it might not be apparent, God “…has brought down the powerful from their thrones, and lifted up the lowly; he has filled the hungry with good things, and sent the rich away empty.” (1.52-53)

According to Luke, Jesus’ mission is to herald the coming Kingdom and announce good news to its chosen ones. (Luke 4.14-21)

According to Luke, the Kingdom belongs not to those with influence and resources and prestige in this world, but to those who are without means and power and place now. (6:20-25).

According to Luke, when people throw parties at which those unable to repay are the guests of honor, they reflect and even experience life in the Kingdom of God. (14:7-14).

According to Luke, those who answer Jesus’ call and are baptized into the community he founded, witness to the Kingdom by giving to the poor and providing out of their means for those in need (19:1-10; Acts 2:45; Acts 4:32-34).

If I was partnering with this text in my preaching this weekend, I would proclaim the God whose Christ eliminates such chasms of injustice and, echoing the passages we have heard over the past number of weeks, identify how the congregation can bear witness to this God through its ministry in the world. 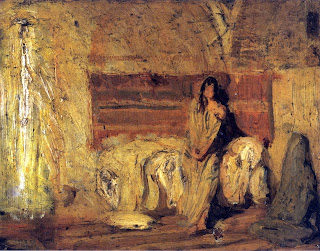 The pulpit in which I find myself on Sunday will be looking for a word sparked by the readings for the Feast of St. Michael and All Angels. Therefore, I intend to take seriously something we often either scoff at or else buy into – the lingering angel craze.
I'm not nearly as cynical about this phenomenon as I once was. In fact, I believe it's related to a healthy human instinct, one that perhaps was suppressed in modern society for far too long.

We humans possess a yearning for that which our senses do not readily perceive, a need for the discovery of something transcendent. It’s hard-wired into us as much as our need to eat and breathe.

The problem, however, is the manifest link between today’s popular search for transcendence and the self-help craze. This self-concerned spin on angels only results in a form of spiritual malnutrition, leaving us craving for more.

The lectionary texts for St. Mike’s Day serve as something of a corrective for us. In the Bible, when angels show up, they're never the focus. They signal that God is about to show up. God is about to pronounce or fulfill a promise. God is acting to set people free.

When Isaac dispatches him to find a wife for himself in Haran, Jacob has only one eye on the lookout for a mate. The other is cast back over his shoulder for fear that big brother was still ballistic about being burned of his birthright.

On the way, Jacob stops in an unlikely place to bunk down for the night. There, he dreams of angels ascending and descending between earth and heaven.

The scene is reminiscent of a ziggurat, on which there was a stairway or "ladder" to the top, where the deity was believed to live. The angels "ascending and descending" suggest contact with God. Jacob unexpectedly receives the promises for which he surely longed: that God is present with him, watching over him wherever he is. Implicit, too, is the promise of a people whom Jacob will father, a rich heritage that will bear witness to this God. In short, the angels signal the presence and promise and action of God.

In John, Jesus invites Phillip to follow him, and in an overflow of evangelistic excitement, Phillip announces to Nathanael, "We have found the Promised One."

Nathanael comes to check out Jesus. Jesus says to Nathanael: here's a true Israelite; that is to say – here is one who sees God! Nathanael is astounded enough to name Jesus as the Messiah. “Stick around,” says Jesus. “You ain't seen nothin' yet; you'll see angels ascend and descend on the Son of Man.”

Do you know what he’s saying? Jesus is saying that he is the ladder between heaven and earth, and assures the young novice that he will witness nothing less than the meeting of God with people.

The meeting of God with people, with us – that is what angels signal and bear witness to.

I remember reading a newsmagazine a few years back that featured an article on angels. In it, a Catholic theologian was quoted as saying, "If people want to get in touch with their angels, they'd be a lot better off working at a soup kitchen."

That's very apt, and very Biblical. And it's a good clue as to how we might satiate that spiritual appetite of ours.

If we want to experience the holy, then we need to be where the angels “are at.” And where they are is where the Son of Man is.

That includes worship, to be sure. In so many ways, the Table is the place par excellence to encounter the presence of the Risen Christ. But not for long, though, because, as soon as we recognize him there, he slips from sight.

And so, where the Son of Man is also includes some places and people that might not occur to most folks as favourite hangouts for angels.

I will try to name some of those nearby places for the congregation I’ll be addressing this Sunday. Can you name such places for your folk, too?

If we want to get in touch with the holy, the spiritual, the presence of God in life, we need not get in touch with angels as if they were the source. We just need to turn up where angels turn up, and then simply do what angels do -- worship and witness to the God of life, and to the One who is our meeting place with God.

Who knows, it might come to pass that when we show up somewhere people will find us to be sure signals of God's presence too. 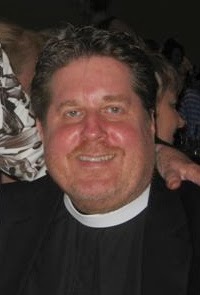 Jay Koyle is president of The Associated Parishes for Liturgy and Mission.