Monday Morning in the Preacher's Study

God's will for humanity will be an ongoing theme for the Gospel readings in October as we spend all four Sundays in the 10th chapter of Mark. The move toward turning everything to an opportunity to teach about discipleship begins this week when some Pharisees test Jesus by asking whether divorce is lawful. Behind this question lies an easy answer of "yes" in http://bible.oremus.org/?ql=310355344%22%3EDeuteronomy%2024:1-4 and in texts in the Torah which assume divorce.

First century marriages were typically arranged by families. The wife became the property of her husband. Divorce then is a very pragmatic concern for the Jewish woman whose husband divorced her just because another woman caught his eye. Rules concerning divorce were primarily to safeguard a woman from the man too easily putting her out.

Beyond this, for Jews only the husband could divorce. Yet this interrogation takes place within the Roman Empire where wives could also divorce their husbands. Jesus treats both cases equally in telling his disciples that the one who gives the divorce commits adultery against their spouse, whether husband or wife. So, a wife who is divorced does not commit adultery in a new marriage, but her husband does when he seeks another woman. For God's ideal is that when the two become one flesh and are joined together by covenant, no human should separate them.

Jesus here is working with the interpretation of scripture in a more nuanced way in which one considers all of scripture to see what God intends. For as one who sums all the law and the prophets in loving God and loving your neighbor as yourself, that self-giving love which is the ideal can not be squared with easy divorce. This does not speak to remaining in abusive relationships. Here the concern is with upholding God's ideal whenever possible rather than looking for the limits of the permissible. Jesus often moves from a question about the loophole in the text to considering the spirit of the law.

The lectionary gives preachers an easy out with Jesus blessing children. Preaching on receiving the kingdom of God as a little child is certainly less controversial. Yet, avoiding that text might seem like unspoken judgment to a divorced person in the pew. So as I journey toward Sunday, I wonder about the life of discipleship that undergirds both of these texts. For preaching gracefully on Jesus' words about divorce might help rather than hurt divorced persons who will hear the sermon.

Jesus, who said we should hold banquets for those who cannot repay us, here blesses children who can offer nothing in return. This upside down view of the world flows from the self giving Agape love which is as foreign to a self-serving consumer culture as it was to a first-century culture concerned with shame and honor.

If I am only concerned about myself, then staying in a committed relationship when it becomes difficult, or when someone else catches my fancy, makes no sense. As baptized Christians, we have renounced all sinful desires that draw us from the love of God and pledged to persevere in resisting evil. Of course we are to seek faithfulness within marriage even as we seek to be faithful to God. Yes, divorce is an option that can be the only good choice in some situations, but as we serve Christ in all persons, we begin with those closest to us and move outward to those who can do nothing for us in return. For when we follow Jesus' method of looking beyond a given passage to God's intention found throughout scripture, we see that God intends a life of discipleship founded in self-giving love. So I am wondering how I might through this text preach living out the love of God through how we treat others. 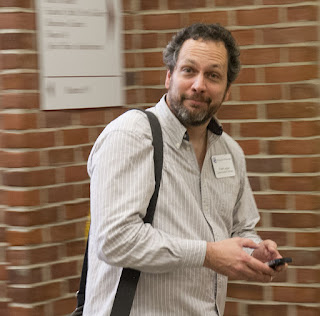 Frank Logue is an Associate member of the APLM Council and has served as its secretary. He worked as a church planter in the Diocese of Georgia, starting King of Peace in Kingsland, before joining the diocesan staff in 2010 as the Canon to the Ordinary.

Monday Morning in the Preacher’s Study

The Boundaries of Baptism?

An initial look at all three readings for the 18th Sunday after Pentecost brings to mind the theme of boundaries.

Even the somewhat truncated story from Esther is about the boundary between God’s people, the Jews, and the royal and political powers of Persia.  (Perhaps this story of an independent woman was chosen to offset the “capable wife” reading from last week.)

I would choose instead the reading from Numbers which is reflected in Mark’s gospel for this Sunday. A young man is indignant that two men outside the tent of meeting were given the same gift of prophetic speaking as the seventy elders gathered within.  Moses replies, “Would that all the Lord’s people were prophets, and that the Lord would put his spirit upon them!”  In the same way, John complains to Jesus that a non-follower was given the same power as they were to cast out demons “in his name”.  Jesus’ reply echoes that of Moses, “Do not stop him… Whoever is not against us is for us.”

The warning that follows to those who offend or cause any of “these little ones” to stumble is echoed in Matthew and Luke.  Luke’s version bears a close relationship to the final section of the Epistle of James, where it leads to a directive to rebuke the offender but to forgive where there is repentance.   “Whoever brings back a sinner from wandering will save the sinner’s soul from death and will cover a multitude of sins.”

For me these stories raise the question about what it means to be baptized, what it means to be reconciled with one another, how this sets Christians apart from the rest of the world.   Communities of the baptized may well work hand in hand with others beyond the church against the forces of evil, but perhaps they are called to uphold a particular integrity, to be unmistakable signs to the rest of the world of the crucified One whom they follow

As a deacon, I would choose to preach from the final section of the Epistle of James where the author writes about healing and reconciliation.  Intercessory prayer in the context of the Eucharist is traditionally led by deacons, whose ministry is in the places of risk and transition in our world and communities, where boundaries intersect and people’s lives are on edge because of suffering, illness, conflict, even the burden of leadership.  Nevertheless, these are places where the Holy is present and the Spirit is at work.

Rowan Williams points out that how intercessory prayer works is an unanswerable question, but we know that it works through Jesus on the cross.  “When selfishness and greedy manipulation are set aside, and insensitivity and complacency are overcome, then there is empty space for the wind of the Spirit to blow through.  That is all we can know.  If prayer ‘works’, it is because of lives that have been crucified with Christ.”  (Rowan Williams, Open to Judgement: Sermons and Addresses [London: Darton, Longman & Todd, 1994], pp. 140-141.) 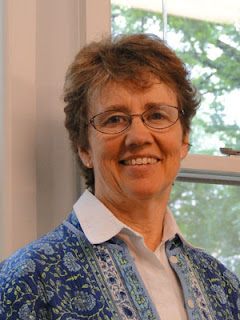 Maylanne Maybee, a member of APLM Council, is a deacon serving in the Diocese of Rupert’s Land (Anglican Church of Canada).  She is Principal of the Centre for Christian Studies, a national theological school based in Winnipeg, Manitoba, Canada.

One of the notable features of the last generation of Anglican prayer books (e.g., the ‘79 BCP, the ‘85 BAS) is the new status given to Holy Baptism.  It is no longer located amongst the Pastoral Offices (weddings, funerals, etc) but stands alongside The Holy Eucharist.  For Baptism and Eucharist are “the two great sacraments of the Gospel” (‘79 BCP, page 858).  And this is just one of many indicators of the new agenda mapped out in our current prayer books: a new agenda for this secular age.  We usually identify this agenda as the recovery of a ‘baptismal ecclesiology’.

The trouble with this agenda is that it may have arrived too late.  For most Anglicans/Episcopalians, baptism is more or less meaningless.  How else could we explain the widespread abandonment of the traditional pattern of Christian life, beginning in baptism and leading to participation in the eucharist?

Our impoverished sense of baptism is not something new, of course; it has been developing over centuries.  At our recent APLM conference in New Jersey, I sketched the historical accidents that have slowly hollowed out the meaning of baptism:
·      in the era of Christendom, there was a growing expectation that every citizen would be baptized;
·      this led to a decline in adult candidates for baptism, as infant baptism became the norm;
·      confirmation emerged as a new sacrament whose meaning was wholly taken over from baptism, requiring a redefinition of baptism that did not include the meanings now attributed to confirmation;
·      paschal (Eastertide) baptism was supplanted by emergency baptism (what the old prayer books referred to as “baptism as soon as possible after birth”);
·      baptism came to be seen as a precaution rather than as a response to the gospel;
·      the priestly vocation of the baptized was usurped by the clergy;
·      preparation for baptism disappeared;
·      initiation to communion was eventually no longer through baptism but through confirmation;
·      baptism became the sign of membership in a Christian society;
·      then, over the last century, as the Christian worldview faded and the Church became a promoter of individualized faith, indiscriminate baptism became our default practice. 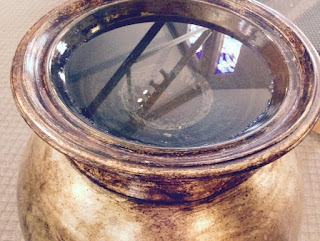 What we are left with is an impoverished sacramental consciousness.  Developing a robust practice of baptism with a truly catechumenal ministry will only lead to frustration, for even if we succeeded in truly making disciples, they would simply be discouraged (perhaps even scandalized) by the bland consumer religion typical of an average congregation.

So where do we start if we wish to rebuild a baptismal ecclesiology? 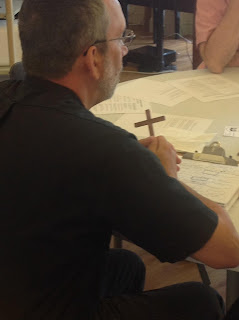 That is the purpose of the new collection of resources introduced at the APLM conference in New Jersey, which the Anglican Church of Canada has provided, called ‘Becoming the Story we Tell’, available at www.anglican.ca/becoming.
Photos from the September 2015 APLM regional conference in Lebanon, NJ. 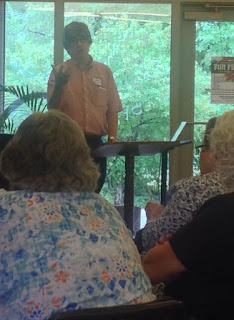 John W. B. Hill, a Council member of APLM, is an Anglican presbyter in Toronto, Canada, author of one of the first Anglican sources for catechumenal practice, and chair of Liturgy Canada. He served as keynote speaker at the September 2015 APLM regional conference in Lebanon, NJ.

Stay tuned for more posts related to ‘Becoming the Story We Tell’ and how you can make use of this resource in your faith community. ~ DJK
Posted by aplm2013.blogspot.com 1 comment:
Email ThisBlogThis!Share to TwitterShare to FacebookShare to Pinterest
Newer Posts Older Posts Home
Subscribe to: Posts (Atom)