“The Master said: ‘There is one thing in this world which must never be forgotten. If you were to forget everything else, but did not forget that, then there would be no cause to worry; whereas if you performed and remembered and did not forget every single thing, but forgot that one thing, then you would have done nothing whatsoever. It is just as if a king had sent you to a country to carry out a specified task. You go and perform a hundred other tasks; but if you have not performed that particular task on account of which you had gone to the country, it is as though you have performed nothing at all. So man has come into this world for a particular task, and that is his purpose; if he does not perform it, then he will have done nothing.’ “ Mevlana Jelal’udin Rumi, Fihi Ma Fihi. 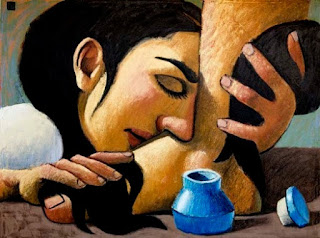 These words of the great Sufi master Rumi can help us capture the meaning in the shocking act of Mary, sister of Martha and Lazarus, at the dinner party in Bethany, the home of Lazarus. For a Christian, the one purpose is clear: to become Christ. “I regard everything as loss because of the surpassing value of knowing Christ Jesus my Lord” (Philippians 3:8), says Paul. As C.S. Lewis writes in Mere Christianity: “the Church exists for nothing else but to draw men [sic] into Christ, to make them little Christs. If they are not doing that, all the cathedrals, clergy, missions, sermons, even the Bible itself, are simply a waste of time. God became Man for no other purpose.” Some criticize the language of Lewis as ‘individualistic’, but he is doing nothing but capturing the hymn of the Fathers, like Ireneaus or Athanasius who proclaimed: "For the Son of God became human so that we might become God."

There is indeed one destination of every human being, the fulfillment of being itself: life in Christ, or simply “life”. Everything else, even matters of great value are relative to this single purpose. Love itself, unconditional, self-emptying love is the first fruit. For the Fathers of the Church, the fulfillment the entire cosmos is through humanity as microcosm and mediator of all. Our sharing in the life of Christ, the Logos, is surely for the life of the world, but even the purpose of life itself.

Some observations related to Mary’s scandalous act of devotion. 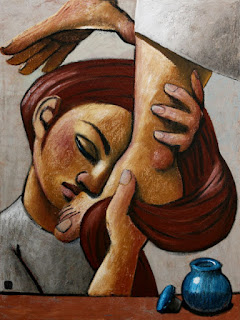 Doxology is where human identity is fully realized. Worship is placing oneself before the Holy Other. We stand under the horizon of the Holy, moving from subject (me) -to object God, and realize God as subject, God is “seeing” us. This primal act names the idea that to be human is to be religious. We are never more human than in the act of praise and worship of God. In its truest sense, worship is always drawing us into a deeper act of kenotosis - an act of self emptying, we to God, and God to us: it is this meeting where the cosmos is illuminated to its true identity and meaning. Mary reveals a posture of complete surrender and adoration to the one who gives life, the Word made flesh whom the world does not know.

We are journeying to the great Passover, and this holy season of Lent is concerned with the Passover of the Lord, and necessarily with our own ‘passing over’ as individuals, as community, as human beings from death to the life. Particularly, Lent is the period of intensive preparation for Christian initiation - the preparation of candidates to be baptized, anointed, and to share in the self-emptying feast of the Eucharist.

Note the context of the party - Lazarus, whom Jesus raised from the dead is the host, representing the Lord’s own imminent death and resurrection. They are having a meal, a party together. Mary anoints the feet of the Lord with costly perfume: a wasteful, lavish anointing with an outrageous price-tag (duly noted by the future betrayer). Again, anointing his body, as they will do to prepare him for the tomb.

Anointing, in the ritual sense, is what it is to be a Christos, an anointed one, a rite exclusively for kings and priests. Jesus as the Christos, the true king and high priest is the one through whom all Christians are anointed: he has after all, “made us to be a kingdom, priests serving his God and Father, to him be glory and dominion forever and ever” (Rev 1:6).

Finally, she is attending to his feet, much like Jesus will do, washing the feet of the disciples in John’s 13th chapter, the night of his betrayal. In a soon to be published paper, Lizette Larson-Miller explores foot washing with baptism rites for some early Christian communities. Often we think of footwashing as the sign of caring for others, and acts of service, but remember Jesus exhortation to Peter: “Unless I wash you, you have no share with me” (John 13:8).  Caring for someone’s feet, foot washing, is a profound act of humility, even self-dispossion - it is kenotic, it is a “sharing” in the cross, the passion, and life of Jesus. 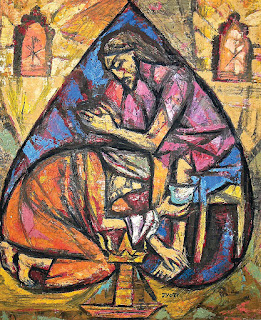 Mary’s act of anointing Jesus’ feet foreshadows Jesus own washing of the disciples feet and marks again the sensual physical and spiritual outpouring of love that is most dramatically enacted in the Eucharist, but here also in this outrageous act of self defacement. Mary is sharing in the life of Jesus, a lavish act of doxology, kenotic humility, and anointing.

Gregor Sneddon is a Presbyter serving St Matthew's Anglican Church in Ottawa. Chair of Liturgy Canada, a council member of APLM, and a participant in the International Anglican Liturgical Consultation, he is first and foremost a Dad, husband, and undercover blues man...

"Jesus Washing the Feet of Peter," by Jyoti Sahi. Available at https://indiaartsmovement.wordpress.com/2015/09/30/jyoti-sahi/