Christ the King / The Reign of Christ

Readings for the Sundays between All Saints Day and Christmas Day focus our attention on the future God has promised for the whole creation, the coming of God’s kingdom, the consummation of history.  Only in the last of these Sundays do the readings point us toward the birth of the King, but this Sunday the readings do focus on kingship, and Israelite kingship is the much contested issue in the Bible which comes to a head on this day.

The Book of Judges makes the case for a monarchy for Israel, pointing out that without a king, “all the people did what was right in their own eyes” (21: 25) — and that had been pretty ugly!  Then Samuel warns the nation that life with a king can get pretty ugly, too (1 Samuel 8: 10 - 18), and the narrative of Israel’s kings pretty much confirms Samuel’s worst fears.  So “the last words of David” in today’s first reading may be very noble, but they sound like the rosy recollections of an aged king who has conveniently forgotten all the dark bits of his career.  Nevertheless, his words capture the longings that have kept the mythology of monarchy alive, even to our own day. 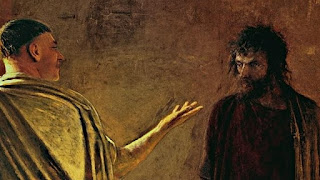 In the gospel reading from the trial of Jesus, Pilate is not yet ready to pass judgment on Jesus, and is still only conducting his inquiry.  The inquiry has reached the critical point: “Are you the King of the Jews?”  Jesus responds by demanding to know what Pilate thinks he means by this question, for Pilate is clearly puzzled, having seen no evidence of the kind of activity he would have expected from a claimant to the throne. Pilate clarifies by insisting that he only means what the accusers of Jesus meant, whatever that is.  “What have you done?” Pilate asks.  In other words, “What have you done that could lead to this outrageous charge?”

Pilate’s puzzlement is understandable.  In his world (i.e., our world) a king (or president, or military junta) secures the ‘kingdom’ by fabricating whatever convenient ‘truth’ will justify the exercise of authority (creating ‘facts on the ground’ as necessary).  In God’s world, a ‘king’ will expose the truth by shining the light of justice and compassion into the dark corners of the world.  That will be a ‘kingship’ unlike any this world could produce, for it will come through God’s grace and initiative.  Those who long for this kind of truth will be delighted to welcome such a kingdom.  If Pilate was anxious about passing judgment on such a ‘king’, it would be with good reason, for sending Jesus to the cross would constitute the enthronement of Caesar’s replacement!

But even though that light shines in the darkness, the world still loves darkness rather than light (John 3: 19). The day will come, however, when “every eye will see him, even those who pierced him.”  The reading from Revelation insists that revelation of the truth, not vengeance, will ultimately prevail, and then those who pierced him will wail, for they will no longer be able to justify the ‘kingdom’ they chose to support. 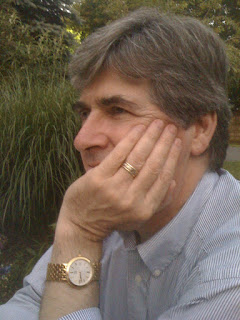 Art: Portion of “What is Truth. Christ and Pilate” - Nikolai Ge
Posted by aplm2013.blogspot.com
Email ThisBlogThis!Share to TwitterShare to FacebookShare to Pinterest