The Preacher’s Study
First Thoughts on Next Sunday’s Sermon,
5th Sunday of Easter, Year A

Try to remember the extreme emotions we experienced during the Great Three Days: the intimate yet ominous gathering at table on Maundy Thursday; the horrific spectacle of fear, hatred, and violence on Good Friday; the silent stirring of hope as the flame was kindled in the darkness of Easter Eve; the solemn waiting, and the joyful cries of “Alleluia, Christ is risen”; then at last, the foretaste of the heavenly banquet around the altar.  (And perhaps even some emotional exhaustion when it was all over!)  Then we slid into the happy rhythms of Easter, confident that our salvation had been won by the power of God who raised Jesus from the dead.

So how do we deal with this disturbing new outbreak of violence in the crowd’s reaction to Stephen (Acts 7: 55-60)? Will it never end?  We desperately want to know that peace has been restored, that the crucifixion was a once-for-all sacrifice, never to be repeated.  Yet here it is, once again. 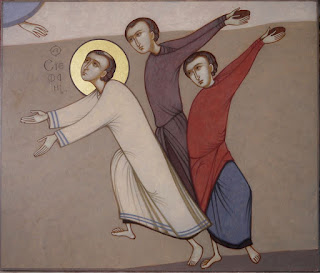 What we are dealing with is the stubborn reality that something is deeply wrong with the world we have constructed.  Jesus may have won the battle against evil, but the world is still not ready to believe this.  Our society still reacts to perceived threats with exclusion or violence!  God laid a cornerstone in Zion, but we stumbled over it, and we still stumble over it (1 Peter 2: 6-8).   Of course Jesus warned his disciples to expect this very sort of resistance and persecution (Mark 13: 9-11; John 16: 2), and he was right.  What is surprising then is not that a faithful witness like Stephen was viciously attacked, but that he responded without bitterness, prayed that God would forgive his attackers, and entrusted his life one last time to the mercies of God — exactly as Jesus himself had done (Luke 23: 34-46).

Thankfully, we have Jesus’ comforting words: “Do not let your hearts be troubled . . . In my Father’s house there are many dwelling places . . . if I go and prepare a place for you, I will come again and will take you to myself, so that where I am, there you may be also.” (John 14: 1-3)  Whatever happens, we do have a guaranteed place in heaven, don’t we?

Well, that is almost certainly not what Jesus is talking about.  His reference to “dwelling places” invokes a major Johannine theme of dwelling/abiding/staying/ continuing/remaining (John 5:38; 6:56; 8:31; 14:2, 10, 17, 23; 15:4-10).  (A number of English words are used to translate the Greek verb meno and its noun form mone.)  Furthermore, the only references to “my Father’s house” in all the Gospels (Luke 2:49; John 2:16) are references to the Jerusalem temple.  In John’s account of the ‘cleansing of the temple’ (John 2: 16), we hear Jesus saying, “Stop making my Father’s house a marketplace!”  But then he goes on to say, “Destroy this temple, and in three days I will raise it up.”  And the writer comments, “He was speaking of the temple of his body.”

A temple is, above all, a place of encounter, a holy place where one can sense and be possessed by the spirit of a deity.  Most religious traditions have temples or shrines of some sort.  The problem with this phenomenon is that it usually supports some kind of idolatry: the ‘sacred’ can be objectified in such places and become an instrument of our own purposes, permitting us to treat other places as merely ‘profane’.  This became the travesty of the Jerusalem temple; Jeremiah protested the false piety of people who proclaimed their loyalty to the temple of the Lord, but oppressed the poor and shed innocent blood (Jeremiah 7:1-7); Jesus likewise insisted that the temple was no guarantee of God's protection, and predicted it would be thrown down and destroyed (Mark 13:1-2).

That is why the prophets insisted that God’s people must be holy for that is how others would come to know the holiness of God (Ezekiel 36:22-27).  That is why the Jesus’ movement soon abandoned its attachment to the Jerusalem temple and adopted ‘temple’ as a metaphor for their movement: “like living stones, let yourselves be built into a spiritual house, to be a holy priesthood, to offer spiritual sacrifices acceptable to God through Jesus Christ” (1 Peter 2: 5; see also 1 Corinthians 3: 10-17; Ephesians 2:21).  The final vision of the Book of Revelation is of the city of God, come down to earth from heaven, where God dwells among his people, where there will be no temple, and the gates will never be shut (Revelation 21:1-4, 22-27).

So the ‘place’ Jesus has prepared for us is the relationship he has won for us — sharing with us his own relationship with the Father (“I am in the Father and the Father is in me”) and sharing that relationship with all others who are ‘on the way’.  It is a place of eternal rootedness where we can grow together and bear fruit.  In other words, Thomas’ problem (“we do not know where you are going”) is not a problem at all, for we only need to know the way!  And the way is Jesus’ way, the true way, the life-giving way.  The sentence that has caused so much grief (“No one comes to the Father except by me”) does not require adherence to the correct beliefs about Jesus, only following the way of Jesus;  “ . . . if you do not [believe that I am in the Father and the Father in me], then believe me because of the works themselves.” (John 14:11)

Helping new Christians appreciate this relationship will be crucial to their appreciation of membership in the Church.  The Church is neither a shrine nor a hierarchical organization.  It is a company of disciples that functions like a temple: a place of encounter, a holy place where one can sense and be possessed by the spirit of God.  It is served by a hierarchy, but not dominated by it.  This kind of ‘dwelling place’ (and there are many of them, according to Jesus!) is our only protection against infection by the fear and hatred that still poisons this world.   “You are a chosen race, a royal priesthood, a holy nation, God’s own people, in order that you may proclaim the mighty acts of him who called you out of darkness into his marvellous light.” 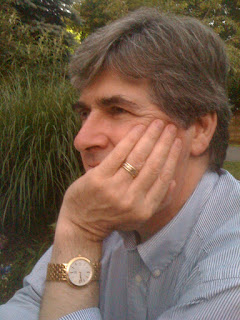 John W.B. Hill is a presbyter serving in Toronto. A Council member of APLM, he is the author of one of the first Anglican sources for catechumenal practice.

"The Martyrdom of St Stephen the Archdeacon (Icon)" by Maxim Sheshakov.
Posted by aplm2013.blogspot.com
Email ThisBlogThis!Share to TwitterShare to FacebookShare to Pinterest