The Preacher’s Study
First thoughts on next Sunday’s sermon,
2nd Sunday of Lent, Year A

Both stories in this Sunday's readings show us what it means to be called to participate in God's new creation, the redemption of the world. 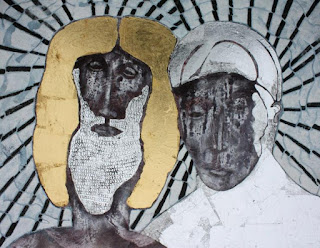 The call of Abraham marks a new departure in the Genesis narrative.  After eleven chapters beginning with the wonders of creation but devolving into a hopeless cycle of global degradation, corruption, violence and confusion, the Creator begins again, telling Abram to go — to leave everything — and promises that Abram will become a great nation through which all the families of earth will be blessed.  Yet Abram is seventy-five years old and Sarai is barren (Genesis 11: 30)! They went anyway, letting go of every security, and living the rest of their life for the promise.  It was a journey toward a future beyond anything anyone had yet experienced, believing in “the God...who gives life to the dead and calls into existence the things that do not exist” (Rom. 4:17). This is the journey of participation in God's work of creation, which has been confounded by sin.

Nicodemus, a son of Abraham, is called by Jesus to take up the same journey of faith.  But Nicodemus is also a respected scholar (John 7:50), a “teacher of Israel” (3: 10).  These are accomplishments not lightly set aside!  He is drawn to Jesus as one teacher to another, but he comes “by night,” not wanting to be seen.  He is not yet prepared for a full, open engagement with what God is doing in the world he knows.

Jesus recognizes Nicodemus’ reservations, and challenges his caution: “You must be ‘born anew’ / ’born from above’.”  Both senses are apparently intended, but Nicodemus is confounded by ‘anew.’  He is not yet ready to acknowledge the critical distinction between things of the ‘flesh’ and things of the ‘Spirit.’  What is born of the flesh (matters that can be adequately accomplished by human effort alone) will not engage in God's creative initiative; only what is born of the Spirit (matters that can only be accomplished by cooperating with God) will engage in God's new creation (cf. 5:17). “Without God, we cannot; without us, God will not.”

Hence, it is encouraging to learn that while Nicodemus is not ready to join the journey in chapter three, we see in chapter seven that he is open to it (7:45-52).  And in chapter nineteen we learn that he has indeed joined the company of pilgrims (19:38-42).

Jesus is the true pioneer of this journey (Hebrews 2:10), the one who will be ‘lifted up’ that all who look to him may live. For God sent him into the world “in order that the world might be saved through him.” (John 3:17)

God called the world into being.  He called Abram, Sarai and Nicodemus to participate in new being, for the sake of the world.   There is hope for us all, if only we will live by the promise, accepting the blessings of God’s new creation for the sake of the generations to come.  It is to this that we have been called in baptism.


"Abraham and Sarah," by Sax Berlin. Information about the artwork and the artist, and a link for purchase enquiries can be found at http://www.whitecourtart.com/sax-berlin/clothed-light-abraham-and-sarah