The Gospel readings for Year C in ‘ordinary time’ (which includes the Sundays after Epiphany as well as the Sundays after Pentecost) are sequential selections from Luke’s version of the story.  In Lent, however, the selection of Gospel readings reflects the special agenda of the season.  The first Sunday of Lent is a good example: the story of Jesus’ temptations in the wilderness is the inevitable aftermath of his Baptism (which we celebrated some weeks ago on the first Sunday after the Epiphany).  Why this flashback? 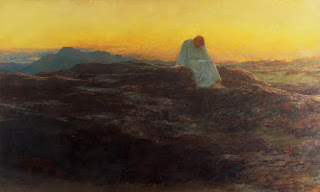 Lent originated as a season of testing for those preparing for baptism — testing whether they had the will to do the will of God — and those candidates for baptism would be enrolled for this testing on the first Sunday of Lent.  So the Gospel readings during Lent reveal how Jesus’ own commitment to do the will of his Father was tested, not just by the devil’s cautionary counsels, but by his people’s growing resistance to him, including resistance from his own disciples!

So the challenge for us this Sunday is whether we will learn to resist evil as Jesus himself did, or whether we too will end up unwittingly resisting the way of Jesus.  But how will we be able to recognize the evil that must be resisted?

The temptations of Jesus arise out of the experience of his baptism (see verse 1); yet Luke has inserted between these two episodes a genealogy of Jesus, starting from “the son (as was thought) of Joseph,” and moving all the way back to “son of Adam, son of God.”  In other words, when the devil says to Jesus, “If you are the Son of God...”, Luke wants us to hear in this not only a reference to the heavenly voice at Jesus’ baptism, but also a reference to his vocation to be the true son of God that Adam had failed to be.  Jesus can only be the Lord’s Messiah and the Redeemer of the world if he proves to be the new Adam who refuses to take the tempter’s bait: the one faithful child of earth who will not live by bread alone, who will worship and serve only God, and who will not put the Lord to the test.  “If you are the Son of God...” invited mistrust of the God who had affirmed him at the Jordan, invited suspicion of the divine intent — just as the serpent had done in Eden: “You will not die; for God knows that when you eat of the fruit your eyes will be opened, and you will be like God.”  But what exactly are the temptations represented in this story?

In Luke’s version, the first helpful suggestion the devil makes is that Jesus “command this stone to become a loaf of bread.”  Unlike Matthew’s version, this is about one loaf only — enough to mitigate Jesus’ own hunger pangs, certainly not enough to buy the support of a crowd.  Just enough to satisfy a modest sense of entitlement. 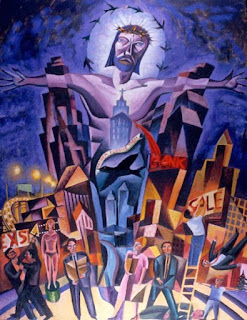 The devil’s second helpful suggestion is that Jesus learn from a real pro: “To you I will give the glory and the authority of the kingdoms of this world; for it has been given over to me, and I give it to anyone I please.  If you, then, will worship me (i.e., imitate me), it will all be yours.”  After all, Adam was supposed to “have dominion over” the whole created order, and now we know how that can be achieved.

The devil’s third helpful suggestion builds upon a specifically religious fantasy: ascending to the very top tier of cultic life, the very pinnacle of the temple.  A dangerous position indeed, not a position you would want without some confidence that God ‘had your back’!

Within the kingdoms of this world, it is often difficult to recognize the face of temptation.  If only the devil had a face, and could be recognized!  Sin is woven into the very fabric of the society in which we live, into its structures, politics, systems and values.  It can be extremely difficult to recognize as evil when it is an accepted part of our everyday lives.  Jesus’ relation to his Father models for us the possibility of freedom from this pervasive power of evil.

The reading from Deuteronomy foresees the temptations that will assail Israelites after their settlement in the Promised Land.  They will forget who they are and how they got there, and begin to assume an entitlement to the fruits of the land.  They will need a ritual of remembrance and thanksgiving to remain true to their calling.  That is why we in our time and place need to “continue in the apostles teaching and fellowship, in the breaking of bread, and in the prayers.”  And this is not complicated; “The word is near you, on your lips and in your heart,” as St Paul reminds us the reading from Romans.

But even more than a ritual of remembrance and thanksgiving, we need to pay attention to Jesus himself and learn from him what it means to be a true child of earth, a genuine son or daughter of God. 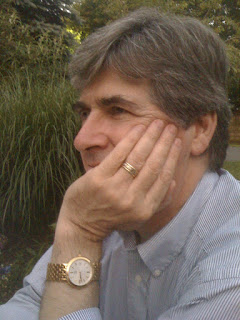 John Hill is a presbyter in the Anglican Church of Canada (ACC). A member of APLM Council, John served as chair for the Primate’s Task Force on Hospitality, Christian Initiation and Discipleship Formation in the ACC. The work of this group led to the development of ‘Becoming the Story We Tell.’
Posted by aplm2013.blogspot.com
Email ThisBlogThis!Share to TwitterShare to FacebookShare to Pinterest