Monday Morning in the Preacher’s Study
First thoughts about next Sunday’s sermon
(8thSunday after Pentecost, July 14, 2013) 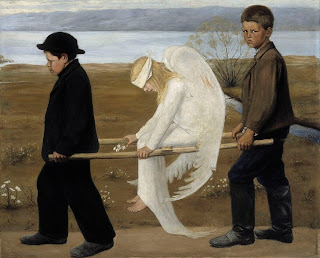 Justice and mercy, God and neighbour, are the broad themes of the lectionary for the next three Sundays in July.

They are also broad themes from our baptismal life, lived on a continuum from our priestly vocation of worship – assigning true worth to God – and our diaconal vocation of service to other, love of neighbour, care for the earth.

In our first reading, we hear “the words of Amos”, a prophet who lived in the 8th Century B.C.E., and along with Hosea, Micah, and Isaiah, revealed God as defender of the poor.  He spoke his message during the reign of Jeroboam II who had built up Israel into an elitist state of prosperity for the few at the cost of crushing poverty for the many.  Amos is shown a vision of the Lord holding a plumb line in his hand, a device used to determine whether a structure is straight or “true”.  The plumb line is held alongside the plumb line of the wall of Israel and Israel does not measure up.

The Hebrew translated as “plumb line” is obscure, and I prefer another interpretation:  the Lord holds a piece of tin in his hand alongside a heap of tin used to build the wall.  Tin, when combined with ­­­copper, makes bronze, a metal of weaponry and warfare.  The Lord is preparing for a thunderous conflict with Israel and will no longer “pass over” or spare its people and king who have strayed far from the Deuteronomic standard of care and protection for the poor, the powerless, and the stranger.

Amaziah, priest of Bethel, warns the king about Amos:  “The land is not able to bear all of his words.”  Indeed, they are words spoken by one who has nothing to lose, one who has made his living not as a professional, but as one who herds livestock and tends fig trees, one who has seen the abundance of the land and its exploitation by Jeroboam.

I see the possibility of preaching a strong message about the use and exploitation of our land through agribusiness or resource extraction – at the expense of the poor and vulnerable, and at the expense of the land itself.  There is opportunity here for a preacher to speak of the prophets of our age who cry out for the land, whose words we can scarcely bear: Joyce Carlson, Wendell Berry, David Suzuki.

It’s a message that can be linked with and reinforced by the gospel reading for this Sunday with its parable of the Good Samaritan – a story we know so well that we risk missing its complexity and subtlety.   A lawyer asks “who is my neighbour?”  Jesus tells a parable of a man beaten by the roadside, ignored and neglected by a priest and a Levite, and tended with mercy by a stranger from Samaria who responds by pouring oil on his wounds and making provisions for his long term care.

We are accustomed to think of ourselves as the Samaritan Church, whose mission it is to rescue and show mercy to those in distress regardless of race or creed.  And we have a fine record of this.  I remember well the story of an Anglican Bishop from Pakistan who told how, in the aftermath of the devastating earthquake of 2005, Moslems flocked to the local Christian church for aid, knowing that they would not be turned away.

Yet we are also a church that has been wounded - battered by decline in numbers, income, and influence, and here in Canada by the legacy we bear of colonialism and residential schools.  Mary Jo Leddy, in her book The Other Face of God: When the Stranger Calls Us Home (Orbis Books, Maryknoll, NY 2011) reflects on Hugo Simberg’s painting, The Wounded Angel, as a variation on the theme of the merciful Samaritan.  She suggests that the angel might be church itself.    Like the two peasant boys who carry the angel away from the city to a place of rest and healing, so the church is being carried away from places of power and influence to live among the poor and be healed.  “It is those who are poor”, writes Leddy, “who need, more than anyone, for the church to become good and merciful again.” (p. 137)

Jesus tells this parable in the context of setting his face to Jerusalem.  Knowing what awaits him, he expands his company of followers, and prepares them for conflict, teaching them how to resist non-violently.  He sends them “like sheep among wolves”, without defence and without resources, at risk of being beaten and left for dead like the unnamed man on the road to Jericho.    In a church that is re-awakening to its sense of diakonia, to its sense of mission, we might do well to remember our vulnerability as we travel through unfamiliar territory.  Our priests and prophets might do well to help equip us for unexpected bends in the road.
Let us thunder with Amos for a regime that shares the wealth of its land with the poor.  Let us dare with the Samaritan to enter border territories and put ourselves at risk, both by offering mercy to ones who least expect it from us, and receiving mercy from people and in places we least expect.  For the Kingdom of God is revealed when the law of love is acted by unexpected people in unexpected ways and places.  Let us pay attention and be changed.

Maylanne Maybee, a member of APLM Council, is an Anglican deacon serving in the Diocese of Rupert’s Land.  She is Principal of the Centre for Christian Studies, a national theological school based in Winnipeg, Manitoba, Canada, that prepares women and men for ministry in the diaconal tradition of the Anglican and United Churches.

Photo: http://commons.wikimedia.org/wiki/File:The_Wounded_Angel_-_Hugo_Simberg.jpg
Posted by aplm2013.blogspot.com
Email ThisBlogThis!Share to TwitterShare to FacebookShare to Pinterest