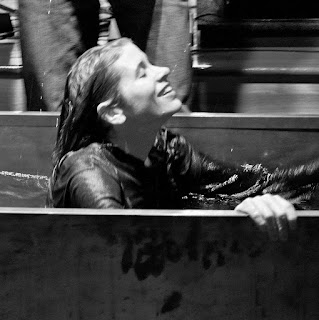 The coming "ninety days" are, or can be, a rich liturgical tapestry of sacramental signs and gestures: Foreheads smeared with ash and oil. The laying of hands in silent prayer upon those who take their final steps toward the font. Knees bent in penitence. Palm branches waved. Tender hands and cracked-heeled feet meeting in an earthenware basin filled with water. Restored cross approached and kissed. Flame kindled. Candle lit. Stories told. Bodies drenched. Assembly sprinkled and splashed. Hands and voices raised in joy. Embrace of peace exchanged. Bread torn and cup poured.

I say the seasons of Lent, Paschal Triduum and Easter can be a rich tapestry of sacramental signs and gestures because I recognize that sometimes we render them otherwise.

For example, we often make the mistake of referring to the sacraments as if they were only objects, things. But they are not. They are symbolic actions involving persons, revealing something of our relationship to God, one another and the world. As such, they have profound implications for the whole of our lives, and for our participation in God’s mission in the world.

What does it mean to pour water over someone and anoint that person with fragrant oil? What is going on when we gather around the Table to share a loaf of bread and sip wine from a common cup? In essence, we “play Kingdom;” we rehearse the Reign of God.

From his birth Jesus was the hallmark of God’s Reign. Throughout the pages of the Gospels we see Jesus constantly concerned about the outcasts and those with precious few options. He not only directed his ministry toward such people; he actually identified with them, walked alongside them, broke bread with them, even died with them.

Faithful liturgy aims not only to proclaim all of this, but also to so pattern our lives. Here God continues to birth a world in which “there is no longer Jew or Gentile, slave or free, male and female.” Here “the least” (whatever that might mean) are named as our kin and as privileged citizens.

At heart, then, the sacraments are subversive. Our participation in them challenges the “dominant” worldview and lifestyle, bidding us to reach out in peace to those we might otherwise overlook or avoid. Sharing in these actions, we say “this is what God’s world is like” and allow God to effect change in our world by changing us.

Such a notion is far from the privatistic notions many Christians entertain about our common prayer. It is a persistent temptation to tune out prophetic word and tone down life-shaping ritual so we might mute the challenges of ambo, font and altar. In the Bible, such behavior prompted both Paul and James to bark about “bad manners” at the Lord’s Table, to scold Christians showing favoritism to the rich while brushing off the poor.

Celebrating the sacraments faithfully is not to escape from the world; rather, it is to welcome the Reign of God. We must take great care with how we prepare and engage them, then, not in a “fussy-fart” kind of way, but rather, using full, authentic symbols, encouraging people to engage fully, and allowing them the time and space to do so. I hope this is one matter to which we can devote some attention through this blog during the Lent-Easter cycle of the church year.

A parishioner in a congregation I served some years ago once remarked that, for him, living the Eucharist meant “...crossing the barrier that separates us from the poor.” The robust celebration of the sacraments transports us across such barriers. Whether or not we scramble back behind them is the choice facing us after we sing the final hymn.

D. Jay Koyle is president of The Associated Parishes for Liturgy and Mission
Posted by aplm2013.blogspot.com
Email ThisBlogThis!Share to TwitterShare to FacebookShare to Pinterest